Green Projects Ongoing, How we are trying to reduce our carbon footprint. 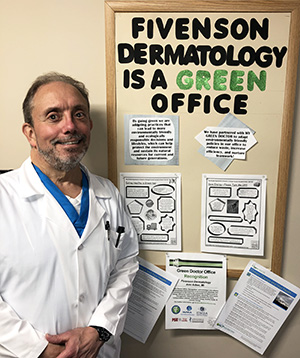 For dermatologists such as David Fivenson, climate change resulting from the trapped heat of sunshine is about as far as you can get from fun in the sun. As a physician and researcher in Ann Arbor, Michigan, he notes that as the planet’s temperature goes up, the incidence of dermatological diseases are as well. Some examples: skin cancers from more time exposed to sun and unprotected, insect-borne skin diseases as bug vectors move north with the warming environment, fungal infections and chemical exposures from water polluted by natural disasters, heat related illnesses and stress-related exacerbations of conditions such as psoriasis and eczema.

Dr. Fivenson is working to galvanize his specialty to take stands that prepare the dermatological community to counter the growing crisis. He says many dermatologists realize the time has come.

An example of the interest: about a year ago, Dr. Fivenson and two colleagues, Drs. Mary Williams of the University of California, San Francisco and Micha Rosenbach of the University of Pennsylvania, were the core of an interest group of members of the American Academy of Dermatology. This group now has about 350 members and official recognition from the AAD as the expert resource group on climate change and environmental affairs, he says.

“At our AAD annual meeting each March, several members present educational forums on climate change,” Dr. Fivenson says. The AAD now has a position statement, adopted July 28, 2018, that describes the crisis bluntly: “There is a strong consensus among professional societies that the health and well-being of Americans are being about adversely affected by climate change, and that these concerns will continue to worsen as climate changes advance.”

Dr. Fivenson’s action steps mirror those in the position statement. Physicians should raise awareness of the effects of climate change on skin health. They should educate patients about how climate change will affect them. They should reduce carbon footprints of their own facilities (Dr. Fivenson works with several other physician groups including The Medical Society Consortium on Climate and Health (MSCCH) and the Michigan Clinicians for Climate Action (MiCCA) and My Green Doctor. And physicians should work with other medical societies on public education as well as ways to reduce the damage that climate change is causing.

What can I do as a patient to help?

More content coming soon! Check out the infographics, handouts and other info posted under the 'Climate Change' section


Please click on the link or QR code for more information:

After HoursFor Non-Emergency questions, use the patient portal or use the Contact Us form

In case of Emergency, call St Joseph Mercy Hospital Operators at (734) 712-3456 and have Dr. Fivenson paged